Liza Loop and the Apple 1, Serial Number One 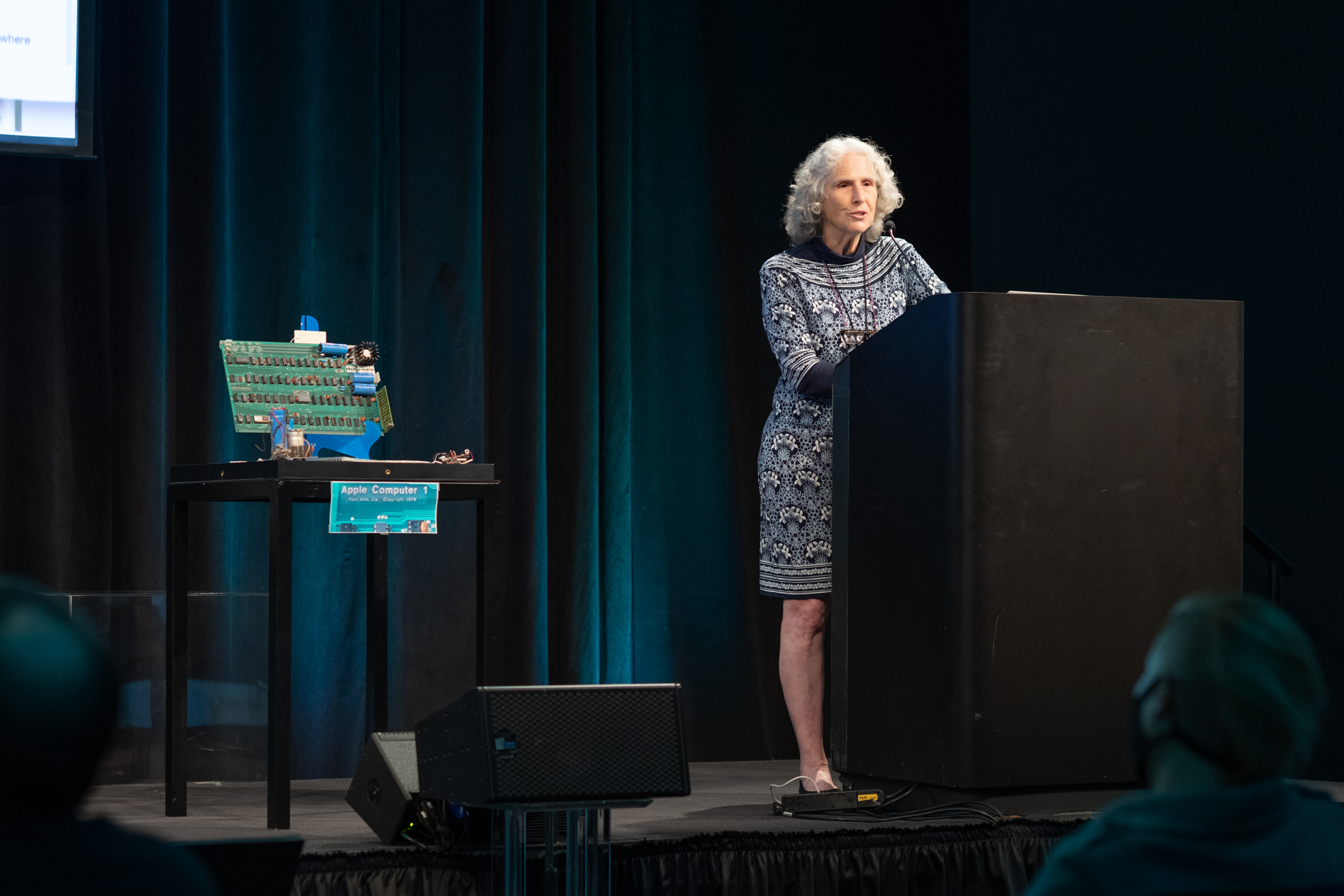 I was fortunate enough to attend a talk by Liza Loop of LO*OP Center today and spend some 20 minutes personally chatting with her, courtesy of the Vintage Computer Festival at the Computer History Museum in Mountain View. Liza is one of the early pioneers of using computers in US secondary education, and getting personal computers into the hands of the public.

What you see next to Liza in the image above is an Apple 1 board, Serial Number One. It was given by Steve Wozniak to Ms Loop in 1976. It’s a priceless artifact now and an important part of computing history.

Here’s my retelling of the story Liza Loop told about the Apple 1. It is a combination of the contents of her talk, and other details that she related to me in our conversation. You can find other similar accounts online if you search for her name.

A colleague told her that the Homebrew Computer Club could provide a promising pool of computer hackers from which she could find someone to help her in her quest. She drove the 100 miles from her Sonoma County home to the club meetings to find someone who would assist her. After presenting her case of introducing computers to secondary education to the club, one (and only one) member of the club approached her with an offer to help: Steve Wozniak.

Woz told Liza that he was working on a new personal computer, and that he wanted his computer to be an educational tool. After several more meetings, Woz promised that he would give her one unit as soon as it went into production.

And Woz kept his word. In 1976, Woz gave Liza the very first Apple 1 unit that rolled off the “assembly line”1. By Liza’s account, Steve Jobs was not happy about his company giving away a computer, so he made Woz pay for it out of pocket, which he did. And that’s how the Apple 1 Serial Number One got into Liza’s possession.

The Apple 1 was a bare-board computer. Woz had to teach Liza how to use it: construct a power supply, buy a Cherry keyboard, attach a cassette player, and so on. Eventually, a working setup was constructed with the computer encased in a wooden box, and Lisa brought it to her high school classes.

Unfortunately, the Apple 1 tape loading process was slow and unreliable. Liza had to adjust the volume and tone knobs of the tape player just right for a program to load, and it would take 20 minutes to load a BASIC interpreter. Worst of all, you couldn’t tell if the program loaded correctly until all of it has been read. Because she couldn’t set up the computer before class period started, a failure to load the BASIC interpreter would mean half the class was wasted.

Even with this fragility, Liza managed to teach several students how to program in BASIC. She would demonstrate a program, and students would submit programs they could type in and run. Given the slowness of the process (and the fact that most students couldn’t touch-type), it meant only one or two programs could be run per class period.

Liza approached Woz with this list of problems, and Woz promised that he would work to fix them. Months went by, and Woz continued to reassure Liza (who was growing skeptical) that he was working on a solution. Finally, Woz showed up with a brand new, Rev 0 Apple II board, which he also plucked off the “assembly line” (it was unclear if Jobs made him pay for this board). It was more or less a plug-in replacement for the Apple 1 in Liza’s wooden box, and it indeed fixed a lot of the problems that plagued the first board. Liza placed the Apple 1 on a metal shelf in a dirt-floor basement in her home and forgot all about it.

Fast forward to the 80s: Apple was then a successful company. Liza was unaware of the historical significance of her Apple 1 board, which was still laying bare on a basement shelf. One day, a popular TV program contacted her and asked if they could do an interview with her and Woz about the historically important board. The program interviewed them for an hour, filmed them walking down the basement steps to reveal the board, and aired the clip as a 10-minute segment. At this point it dawned on Liza that she had a piece of history in her possession.

Since then, Liza took care of the board as a valuable historical artifact. But as the device became more valuable over the years, it also became increasingly difficult to insure, especially because Liza lived in fire country—near Santa Rosa, in fact, where the HP archives burned to the ground in 2017 due to brush fires. Today, Liza is unable to find anyone who would underwrite an insurance policy on it. When brush fires again threatened Sonoma County in 2020, she begged the Computer History Museum to house the board in case her house burned to the ground, which they agreed to do.

Today, Liza continues her work on computers in education. She is the conceptual lead for KEPLAIR, the Knowledge-Based Environment for Personal Learning using AI Recommendations.

This is the extent of my recall of the combined information I gathered through personal conversation with Liza and her talk at CHM. I will update it with any missing information when the CHM video comes out.

If you find errors, mischaracterizations, or important omissions in this story, please reach out to me so I can correct it. You can reach me on twitter or Facebook.